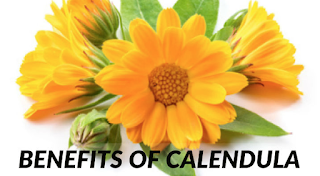 Plant common name is: Marigold.
Plant scientific name is Calendula officinalis.
Calendula is well-know herb and uplifting ornamental garden plan that has been used topically, in ceremonies and as a dye and food plant for centuries. Has a fibrous, annual root with a stem about a foot high. It is native of South Europe, the Mediterranean and the Orient. It is a common garden herb with a feeble, aromatic, somewhat narcotic, but not unpleasant smell. Is best to harvest the flowers in the summer, in the heat of the day when the resins are high and dew has evaporated. In medieval Europe calendula was known as “poor man’s saffron” as it was used to spice and color various foods and soups in particular. It was also used to dye hair and to make butter more yellow. In traditional Chinese Medicine TCM, calendula called (Jin Zhan Ju) is consider energetically neutral and drying and is use to support healthy skin (1).

Nicholas Culpepper a botanist in the 17th century mentioned using calendula for the scalp and skin and mentioned that the flowers tea comforts the heart. It was also associated with the sun and the fire element. It was believed to have magical powers of protection and to keep evil out if put under the bed. It is used well diluted for the chafing and excoriations of infants, ulcers, after surgery to induce healing, to wash abscess cavities, to prevent cicatrization from burns and scalps, in eczematous and ulcerative skin diseases, and vaginitis. It is also used for mild conjunctivitis in the portion of 5 drops to the once of the rose water. In vaginitis, endometritis, all uterine and vaginal abrasions, and non-malignant ulcerations, leucorrhoea, intra-uterine wash; for congestion: of the nasal membranes, otitis media, skin infections and long-standing inflammation (2).
Locally, is used to wounds and injuries to prevent suppuration and promote healing. Internally, is used in chronic suppuration, capillary engorgement, varicose veins, old ulcers, splenic and hepatic congestion.  Calendula is a plant. The flower is used to make medicine. Calendula flower is used to prevent muscle spasms, start menstrual periods, and reduce fever. It is also used for treating sore throat and mouth, menstrual cramps, cancer, and stomach and duodenal ulcers. Calendula has also been used for measles, smallpox, and jaundice. (2).